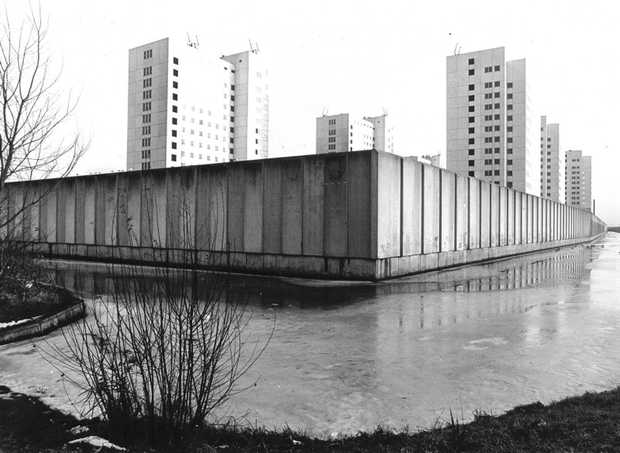 I was studying criminology. Some fellow students of mine visited the Bijlmer jail, that had just opened (funny word for a prison), every Tuesday evening, to spend an hour with a group of prisoners. For some reason I didn’t think that was very useful at the time. Why talk to criminals when you can read a book about criminology, right? And besides I was too busy with The Dutch. That changed when one of my college friends approached me in the classroom. He said the guitar teacher, who gave lessons on Tuesday nights in the prison, was going to quit the job. He was looking for someone to replace him. My friend asked me if I was interested in the job. I would get paid for it. We agreed that I would join them in the next Tuesday talks with the group. That gave me the chance to get acquainted with the guitar teacher and his class.

That Tuesday evening I rode to the Wenckebachweg, where the six dismal towers formed the brand new Diemen skyline. I had my Spanish guitar balanced on my handlebar. After having past the first houses and administrative offices of the prison, I reported at the guard house, well in time for the lesson. Two uniformed guards gazed at me behind armoured glass. Cameras were everywhere. While I was wondering if I could make a joke (“Good evening, I’d like to check in please”), a man entered the room with a guitar bag tied to his back. He smiled at the guards. “Hey friends, this is Hans, he will perhaps replace me!” As the guards prepared the necessary formalities, we shook hands and he introduced himself as Martin, the guitar teacher. After I had filled in the forms and they had made a copy of my passport, the glass doors were opened one by one electronically. I followed Martin, who seemed to feel at home here and was chatting nineteen to the dozen.

“I heard you‘re playing in a band, The Dutch? You’ll notice that the level is very variable here. For most it’s just a distraction.” Martin shrugged. “Thats’s OK. Every now and then one of them is really interested to improve is guitar skills.”

We walked through the central corridor that connects the six towers. “They call this the Kalverstraat,” said Martin. He paused at the entrance of the second tower. “Here we are, House of Detention De Schans. We have to be on the second floor.”

A female guard escorted us to a floor which obviously served as a recreation room. Through the window of one of the rooms I noticed my fellow students busy talking to four or five men. No Lombroso types I assessed, slightly disappointed as a sophomore criminologist. They were ordinary guys, without protruding eyebrows, low forehead and earrings. In the adjacent room Martin and I took out our guitars. “I nearly forgot, don’t ask them bluntly about the crimes they supposedly have committed, even if you’re curious about it.”

Suddenly the room was filled with bodies and guitars. Martin introduced me. “This is Hans, I’ve told you I would quit this job, didn’t I? Hans is on trial, maybe he will replace me next week.” “Cool,” said a young man with teeth like an Emmental cheese, “You heard of Jethro Tull?”

Martin pulled out a paper bag. “Because it’s my last lesson tonight, I brought some cookies!”

“Far out, man!”, a few guitar students shouted in unison, “Hashish cookies!” I looked at Martin. He grimaced. “No guys, these are just pastry cookies. Tasty too! ”

Visibly disappointed, the students looked for their seats. A few people grabbed a cookie from the bag.

“Shall we start where we left off, House Of The Rising Sun?” Martin laughed imperturbable, and he strummed the A minor chord.

That evening I decided to become a guitar teacher in the Bijlmer jail. And furthermore, that my own farewell, in due course, would be different.