Just before Christmas a good friend called. She said she was reading England is closed (my translation, HC) by Rob van Essen. This novel from 2004 revolves around the main character Thomas. The year is 1999. Thomas is having casual conversations with a postman. These talks are philosophical asides about their respective experiences in the eighties. Brace yourself, here it comes. As she reached page 96, my friend shrieked (sorry, my imagination). Because chapter 37 is about The Dutch. 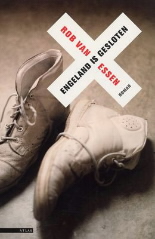 The postman remembers concerts during demonstrations and events at the Rokin and in the Sarphatipark, Amsterdam. He recalled a sympathetic pop group. With songs that could have been classics. However, after a final belch called Siobhan, they seemed to have disappeared from the earth. Never to emerge again, not even in the where-are-they-now programs.

As a matter of fact, the postman’s memory was quite detailed, but not entirely accurate: to his recollection, I used to dedicate Working at Los Alamos to Anne Frank. Furthermore, he remembered we sang “We’re so small” as the chorus of that song, in both English and French. Almost correct. It was another song, Nous Sommes Très Petits I dedicated to Anne Frank. So it goes with the memory. I wondered wether it was the postman or his creator who confused both songs, so many years later.

I wrote an email to Rob van Essen in which I introduced myself as the lead singer of The Dutch. I told him how delighted we were to recognise ourselves in his novel England is closed. And I wrote that The Dutch had reassembled and was currently recording a new album. Last but not least I assured him that we would shun the where-are-they-now programs like the plague.

A few days later came his answer. Like me, he was pleasantly surprised. “When as a writer you include elements in your book that are borrowed from reality, you secretly hope that those elements will hear it at a certain point, and you wonder what they will think. And now I hear from you.”

Rob had to admit that his postman had probably only been the interpreter of his own memory, he had confused those two songs himself. In reading my email he remembered again.

I just finished reading England is closed. It is a beautiful story about three guys from Amsterdam who met in the eighties. They work in a youth hostel, get girlfriends, experience heartbreaks. Life is happening to them. Years later, in 1999, they see each other again. They are annoyed by all the fuzz about the millennium bug and they are getting ready for New Year’s. That same year the postman regularly drops by for a chat with Thomas. About The unbearable lightness of being, about Anne Frank, and why Dutch people mention her name so little. About anything and everything. And, in chapter 37, about The Dutch. I was prepared, otherwise I would have shrieked myself.

Rob van Essen is a blogger like me. He wrote a great blog about our email exchange. For him, and for that matter for me and the other band members, it was a small Christmas story: “This is nice. A little voltage loop that ties off after eleven years, completely unexpectedly, it gave me a happy feeling of satisfaction, as if somewhere in the world a very small corner suddenly turns out to be true and authentic”.
I felt that way too, just before Christmas. Somehow it suited the general feel-good atmosphere of those days. For that matter, my friend’s discovery of the little chapter in England is closed was a kind of serendipity: a well timed coincidence.