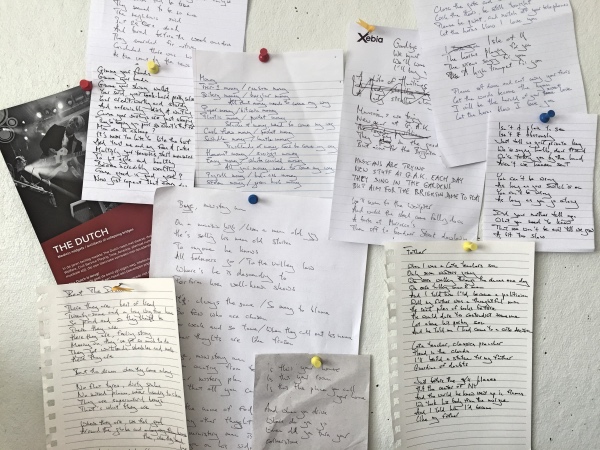 In the eighties most of my lyrics were quite melancholy. I read books on the prison riot in Attica, on the development of the atomic bomb in the Manhattan Project and on the limits to growth. All that gloomy knowledge found its way into my lyrics. Frankly, writing lyrics was the proverbial dirty job that I had rather passed on. With The Dutch, the music comes weeks, sometimes months, before the text. To me the text is a necessary evil, but I might as well make the best of it.
In those days, the zeitgeist had me by the throat. “Wur doomed!” I echoed soldier Frazer from the BBC series Dad’s Army. Not literally, but hidden in phrases like:

You’re probably curious whether my lyrics are still full of social criticism. Yes, I cannot resist. Lots of things bother me and make me angry: the moronic populism, whether from the right or the left, the ease with which we surrender our privacy for a false sense of security, the duo stupid & rowdy that poisons the social media. Maybe Left Of Center is the text that sums it all:

But fear not, there is more. I sing for my love (Isle Of You) and write about my children (Beat The Drum). They are personal lyrics of the kind I shied so many years ago, anxious about cliches. I think I’m more relaxed now. Oh well, older and wiser, you know. And more sentimental, not to forget. Dolly Parton makes me cry easily nowadays. Let alone the opening choir of the Mattheus Passion.

I won’t brag about these lyrics. I hope I’ve managed to sing some things that ring true on our new album. That’s for others to judge. I am especially proud of a tribute to Bert’s and my father. Han Croon died in 2001. He liked our music only so-so. But he was a wise, sweet and thoroughly civilised man. I often think of him, as he walked through the Museum of Antiquities with a group of mutinous secondary school students, being totally imperturbable. Or as he chatted with his perky son about the pros and cons of a political career.

Latin teacher, classics preacher
Head in the clouds
I’ll build a statue for my father
Guardian of Doubts

Latin teacher, preacher classics
Head in the clouds
I’ll build a statue for my father
Guardian of Doubts