Chance? I don’t think so

If there was any doubt about the Great Conspiracy reaching its apotheosis on 22022022, it has been swept away in recent days, there were so many omens of impending doom. At first I was still troubled by nagging doubts. After all, it could be a coincidence that the program was delayed and that we, as the last band, had less time to set up our gear. But when the DJ on duty unexpectedly asked us if we actually knew that Bring It All To Me (feat. 50 Cent) was one of the most streamed songs of The Dutch on Spotify, it dawned on me. While I half-jokingly replied that I had done my best on the vocals, I realized that 50 cents was about the amount Spotify pays us annually. Chance? Confusion set in and I still had to play.

Solid Ground, the first song, the lap steel feels awkward but it works, I’m back in control. Still a bit shaky though. For the second song the headphones have to be removed, the lap steel set aside and the guitar hung around my shoulders. Just a changement, stay relaxed now. I already want to start the intro of Fairytales but Jen whispers “Headphones Hens!” Naturally. You can’t do it without headphones. I bend, my guitar strap comes loose and the Telecaster clatters to the ground. I pick it up, check the damage and see that the A-string is broken. That’s when I swear wholeheartedly. Because how is this possible? On all my guitars, the guitar straps are secured with those red rubbers that make Grolsch swing-top bottles so immensely popular with guitarists. Why not this one? Who removed that rubber so that the Telecaster was on edge? Chance? I don’t think so. While the scope of the Conspiracy comes to my mind more and more I fight my way through Fairytales and This Is Welfare. And I curse the demons that have taken my beloved A string from me. Without an A string I am severely handicapped: what is meant as a C seventh suddenly becomes an E minor.

Later, when I leave the Radio Veronica building, my amplifier falls out of a cart. Jesus, how many signals do you want? To put an end to all doubt, they put a sign in front of my door the next morning. “Parking prohibited due to work from 22-02-2022. Towaway regulation in effect”. Now I’m sure that on 22022022, the very day that all preparations should culminate in the triumphant release of our new album, they (who??) will tow me away. 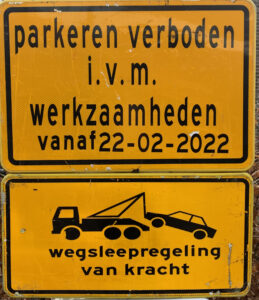