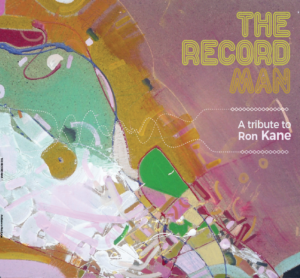 I never knew Ron Kane. He knew about me though. Only when he died, last year, did I hear of his existence. We were the same age. Living in Los Angeles, he ran a mail order company with which he imported and exported vinyl, and he was loved. So beloved, that there is now an album dedicated to him. I sing a song on that album, How Can The Human Heart Occur In The Universe? Because I also started to love Ron Kane posthumously.

Last December I got a message from Bob Gaulke, a New York artist and producer. I knew Bob from online conversations about The Dutch, for instance on This Train Is About To Explode, one of the songs on Four. This time he approached me about a project he was working on. It was to be a tribute to a dear friend who had once sold him Under The Surface and La Grande Parade (1).

That friend was Ron Kane, and Bob introduced him as a music fanatic who spent his entire life looking for special pop music from countries like Japan, New Zealand and … Netherlands. He traveled there regularly, and became friends with members of Split Enz, Nits, MAM and other bands. Back in Los Angeles, with a pile of LPs in the trunk and impressions in the head, he started to warm up his friends for his new treasures. Bob remembers countless nocturnal telephone conversations with Ron, about nothing but cross and obscure music. Ron Kane hated the mainstream and embraced the periphery, so passionately that he inspired a large circle of friends and acquaintances, far before the algorithms took over that role. (2)

He fell ill last year. Bob Gaulke started a musical “get better soon” project to give his friend a heart. But Ron’s situation worsened quickly, and when he died, Bob decided to continue the project to honor his friend. That’s how he came to me. And 28 other artists worldwide, whom Ron Kane had introduced to him in the past. Artists who did not know each other in most cases. It had to become a tribute album.

The Record Man – A tribute to Ron Kane  is now finished and it is a remarkable album. All songs were created because musicians in America, Brazil, the Netherlands and other countries contributed to it, without the need for a plane. Bob had How Can The Human Heart Occur In The Universe? in mind for me. I had no idea what kind of record The Record Man would be, but this song sounded like a ballad. The lyrics were difficult to understand. Bob told me about Ron’s difficult relationship with women. He said Ron was struggling with love and loneliness and that the music was his way to cope with that.

How can the human heart occur in the universe?
Always something stronger / always something worse
Giving all you got / and giving more
Just for a shot / of something pure

The version that Bob sent me was very basic. Rick Snyder had not added his bass notes to it; Matt Carillo was there on a Wurlitzer piano but not on saxophone yet and the drum track came from a box. I didn’t know that the guitar track was played by Marco Raaphorst, with whom I became friends, thanks to this project. And neither that Marco came up with those few strange chords after the chorus.
Marco made a very nice podcast about Human Heart, by the way.

I interpreted the text, added a few vocal lines and sent the tracks to New York. At the beginning of January I met with Bob in the Burb Castle, a café in the East Village, where we talked about The Record Man. Back in the Netherlands, I added a few guitar licks at the end of the song.

The Record Man – A tribute to Ron Kane is an album like an air castle: everyone sees that it has towers, secret corridors, heralds and drawbridges. But everyone hears something different. The spirit of Ron Kane is unmistakably blowing through the corridors: it is weird, Zappa-like, experimental. It is as far away from the mainstream as you can imagine.